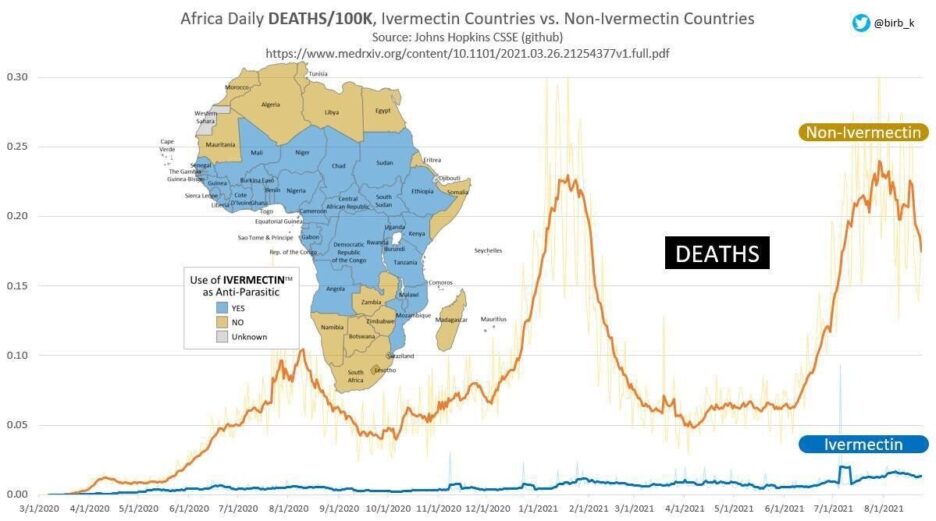 It’s time the world begins to seriously look at Ivermectin.

The Gateway Pundit has reported on the FDA and CDC’s suppression of repurposed medications Hydroxychloroquine and Ivermectin. We’ve also reported on India’s miraculous results incorporating both medications.

Are effective COVID medications like Ivermectin being suppressed because they could cause vaccines to lose government funding?

Here’s a shocking comparison between Israel, that’s one of the most vaccinated countries on the planet, compared to India with one of the lowest vaccination rates and is treating with Ivermectin.

And now there’s more data from Africa showing the undeniable results.  It seems as though Africa has now surpassed the U.S. in its ability to follow the science and apply it.  It’s important to point out the graphs presented are from John Hopkins.

This morning, Tokyo Medical Association announced publicly that it is recommending that all doctors begin treating COVID with Ivermectin after witnessing the results from other countries. Japan has a very conservative culture and the same extends to the country’s practice of medicine. Here is the video press release:

While countries from the third world to the most medically advanced in the world are smart enough to use a medication that is safe, approved, available, cheap and works better than the vaccine to save lives, our FDA is presenting the life-saving medication this way:

In a deceptive attempt to sabotage and mislabel, FDA’s page on Ivermectin presents the medication as one for animals with a picture of a horse.

Some may say this is in response to recent reports of people attempting to self-medicate with animal Ivermectin. However, the FDA’s propaganda page conflating Ivermectin with a horse has been up for months before those reports.

While there is a version used to treat animals, antibiotics are also separately formulated to treat people as well. Animals get the animal medicine and people get the people medicine.

To clarify, Ivermectin has won the Nobel Prize for medicine in 2015 and is on the WHO’s list of essential medicines. Prescribed to over 3.5 Billion people, Ivermectin has one of the best and longest safety profiles in the history of medicine.

The rest of the world appears to be catching on to the fact that following the United States is sadly not necessarily the safest and best bet it once was.  Undoubtedly for very good reason.