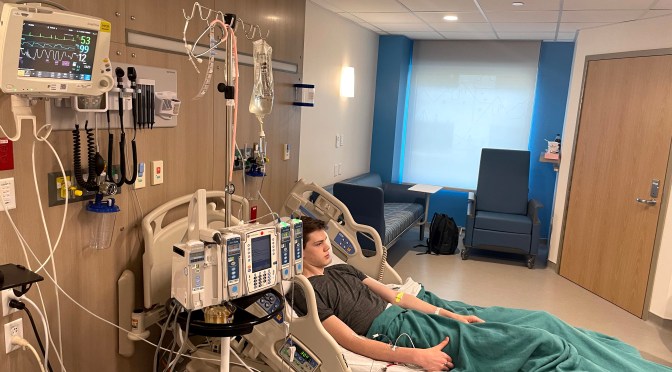 Steve Ohana, PhD is an Israeli economist and mathematician who appears frequently on the Israeli program i24, as a business and finance commentator.

In an August 2021 paper entitled “Young adult mortality in Israel during the COVID-19 crisis,” Dr. Ohana examined a surge in Israeli youth deaths which he says are unexplained by anything other than a surge in vaccinations for the age group 20-49. Israel is one of the most vaccinated countries in the world, and is heavily studied as a prime ‘test tube.’

In August Beckers Hospital Review reported that nearly 60% of hospitalized COVID-19 patients in Israel are fully vaccinated, contrary to US media reports claiming that it is overwhelmingly the “unvaccinated” who are getting COVID, which is anyway a 99.8% recovery rate virus. As Anthony Fauci himself wrote in February of 2020 in the New England Journal of Medicine: “the overall clinical consequences of Covid-19 may ultimately be more akin to those of a severe seasonal influenza.”

Dr. Steve Ohana concluded that his findings should “urgently prompt a pause in the vaccination campaign, until the reasons of the youth excess mortality observed in mass vaccination countries are clarified.”

“[The] unexpected rise in excess mortality among young adults was also found in two other countries, the United Kingdom and Hungary, which have in common with Israel a massive vaccination of their populations…”

“from the data put altogether, the only event that can plausibly account for the repeated highest rises in excess deaths both in February and March 2021 is the vaccination.”

Below: Steve Ohana, Economist/Mathematician, on Israeli i24 (program episode)

Possibly vaccine-caused deaths in the US reported to the CDC’s Vaccine Adverse Events Reporting System (VAERS), are now over 16,000. The CDC admits, in a page on VAERS in general, that reported events are “only a small fraction of actual adverse events.”

“”Underreporting” is one of the main limitations of passive surveillance systems, including VAERS. The term, underreporting refers to the fact that VAERS receives reports for only a small fraction of actual adverse events. “

Dr. Ohana’s conclusions follow a year of hundreds, if not thousands, of doctors and scientists, none of whom are against all vaccinations, or “anti-vaxxers,” calling for a halt to the mass COVID injections. [Links to doctors’ calls for halts to mass “vaccinations,” partial list: 1, 2, 3, 4, 5. ]

Among them is the inventor of the mRNA technology Dr. Robert Malone. The main concern centers around the failure to conduct the normal three to six years of animal trials for safety before human testing, and years more of human trials. The average time for bringing any new drug or vaccine to general use is 10 years.

Dr. Malone said in an interview:

“…before we get a product released to use in humans, in the normal situation where we’re not in a rush, we have some really rigorous tests that have to be done in animals. And revealing that spike gets cleaved off of express cells and becomes free is something that absolutely should have been known and understood well before this ever got put in humans.” [Full Interview at Bitchute] [Transcript]

A former Chief Science Officer and Vice President at Pfizer has said that he fears the third COVID “booster” shot “may be used to initiate depopulation.” [Dr. Mike Yeadon LinkedIn profile.]

Dr. Mike Yeadon, for 16 years a Chief Science Officer and VP for Pfizer’s Global R&D Allergy and Respiratory Research Division, said in an email to supporters, published in Off-Guardian:

“There being immunologically no need or justification for 3rd & subsequent vaccines (booster, top-up, variant) the fact that they’re imminently to be administered to people en masse should send alarm bells ringing loudly. Biotechnology has awesome power but it can very easily be misused. I am of the view that 3rd & subsequent vaccines may be used to initiate depopulation.”

Dr. Yeadon has said since summer that he has reluctantly concluded that governments have engaged in a campaign of blatant, easily disproven, coordinated “lies.” He said in the email that:

“What almost every government told their people was an absurd set of statements, most of them easily disproven by reference to published literature & often simply by thinking.”

Dr. Yeadon is one of hundreds, in not thousands, of doctors and scientists who have called for a halt to mass COVID vaccinations as unnecessary for a 99.8% overall recovery rate virus, and far too soon given the lack of long-term data for a novel technology.

“There is absolutely no need for vaccines to extinguish the pandemic. I’ve never heard such nonsense talked about vaccines.”

“You do not vaccinate people who aren’t at risk from a disease. You also don’t set about planning to vaccinate millions of fit and healthy people with a vaccine that hasn’t been extensively tested on human subjects,”

A study published October in the prestigious Toxicology Reports, a peer reviewed science journal, says that actual vaccine-caused deaths “could be in the hundreds of thousands for the USA for the period mid-December 2020 to the end of May 2021.”

In the paper “Why are we vaccinating children against COVID-19?” a group of international scientists wrote:

“VAERS historically has under-reported adverse events by about two orders-of-magnitude, so COVID-19 inoculation deaths in the short-term could be in the hundreds of thousands for the USA for the period mid-December 2020 to the end of May 2021,”

The paper strongly argues that children are much more harmed by the vaccines than by COVID, saying:

Images from ScienceDirect reprint of “Why are we vaccinating children against COVID-19?”

Although the FDA and CDC routinely diminish vaccine-related deaths, by using such arguments as ‘correlation does not necessarily equal causation,’ it also never explains why there are now triple the number of possibly linked deaths reported for the COVID injections than for all other vaccines combined, since VAERS was implemented in 1990.

In 1976, the swine flu vaccine program in the US, which was administered to 40 million Americans, 25% of the population, was halted after 25 possibly related deaths, without causality being proven. The VAERS system was set up to be an early warning system that vaccines may be dangerous.  The CDC website states that VAERS is an: “early warning system to detect possible safety problems in U.S.-licensed vaccines.”

Neither do the CDC or FDA ever address the statistically meaningful fact that one-third of the deaths following the mRNA injections occurred within 48 hours, in a dataset covering up until February 12th. A dataset covering up through June 18th shows the same pattern. The CDC or FDA do not explain the over 20,000 permanent disabilities, and over 400 miscarriages, now reported to the VAERS system, except to say they cannot conclusively be linked to the injections, even when the victims are robustly healthy people of young age, and families and family doctors are certain. A tragic example is star high school basketball player Everest Romney (below) and there are now many thousands of others.

Although the Pfizer, Moderna, the CDC and the FDA maintain that all deaths are investigated, results are never posted, and formal requests for medical reports and autopsies have been ignored.

Below source: The Desert Review. Note: reported deaths for last data-point now over 16,000.

A Harvard-Pilgrim study of VAERS from 2007 concluded that the true number of adverse events associated with a vaccine may be 100 times higher.