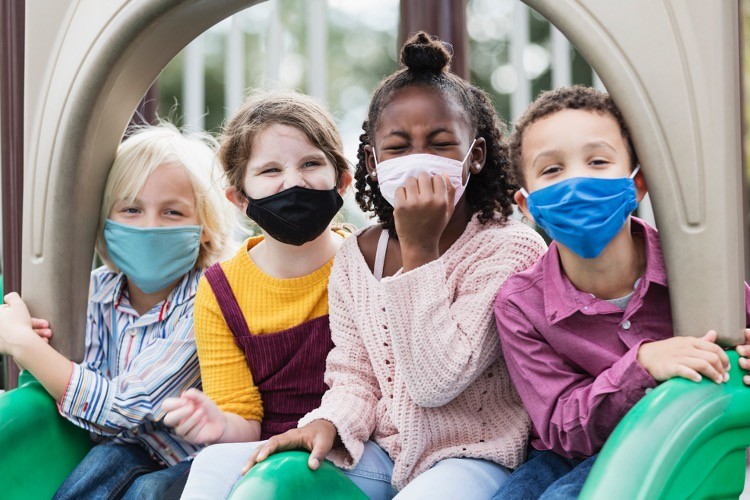 Perhaps this makes clear why a prominent commentator, and others, said long ago that COVID regulations — masking included — are “child abuse.”

The research in question, out of Brown University in Rhode Island, does in fact identify masking as a possible cause of the cognitive decline, which is severe. The Daily Mail summarizes the story:

scientists Sean CL Deoni, Jennifer Beauchemin, Alexandra Volpe, and Viren D’Sa, penned the review, in conjunction with the global consulting firm Resonance, collecting data from 1,600 children — and their caregivers — who have been enrolled in the study between the ages of 0 and 5 on a rolling basis.

The probe analyzed the cognitive development of the youngsters … and looked at how average development scores in three key areas had been affected during the COVID era — with shocking results.

A child’s early learning composite is derived from their fine motor, visual reception, receptive, and expressive language scales, and is the early years equivalent to an IQ score.

While IQ is said to be two-thirds heritable, this leaves one-third environmentally influenced. It has long been known, too, that children raised in both material and intellectual poverty have lower IQs than kids in more optimal settings; moreover, it has been shown that lifestyle improvement can cause a group’s IQ to rise precipitously over time.

So what the Brown study indicates is that SARS-CoV-2 regulations may be causing a “lifestyle regression” that could be reversing any IQ gains hard won via modernity’s triumphs. A 23-percent drop is profound, too.

What’s more, this IQ reversal might have already begun some decades ago (as this study indicates), perhaps owing to what we could loosely call our descent into Idiocracy. Not to be flippant, but given this, the last thing we need is to make people even dumber.

None of this was unpredictable. Last year already, I wrote a piece titled “What Fate Awaits the COVID Kids, a Generation Raised in Isolation and Fear?” in which was discussed the social and psychological risks lockdowns and other COVID Ritual pose to children. (I’ve also reported on the physical health perils inherent in masking kids.) That intellectual impairment might attend this child abuse should be obvious.

It likely was so to Fox News host Tucker Carlson, who, reporting in August on an Irish study finding that masking children is bad medicine, called the practice “child abuse.” I have also — on multiple occasions.

Now we may more clearly see why. The Brown researchers point to how “masks worn in public settings and in school or daycare settings may impact a range of early developing skills, such as attachment, facial processing, and socioemotional processing,” relates the Mail, and this certainly is plausible. Yet is there also a simpler, physical-health-oriented factor at work?

I reported in July on research out of Germany and Poland indicating that just minutes of mask-wearing leads to dangerously high carbon dioxide levels in children’s bloodstreams — oxygen deprivation, in other words. And we know, of course, that severe oxygen deprivation (hypoxia), such as in drowning scenarios, can cause brain damage. Hypoxia during childbirth can have this affect as well, and induce conditions such as cerebral palsy.

But what of milder hypoxia? Can it cause reduced cognition? The answer, it appears, is unequivocally yes. Consider that untreated childhood sleep apnea, a condition causing “fragmented sleep, interrupted breathing and oxygen deprivation” is “linked to brain damage [and] lower IQ,” reported Science Daily in 2006.

Note, too, that children with sleep apnea suffer such consequences even though oxygen deprivation occurs only during their hours of slumber. Given this, might the same brain damage and lower-IQ phenomenon manifest themselves when children must endure oxygen deprivation during an equivalent number of waking hours? If so, and if the German/Polish study is correct, it follows that long-term masking of children can lower IQ.

This is just a theory that may or may not be valid (it would be nice seeing some credible research on the subject). But here’s what’s not a theory:

Yet the risks of masking them are real.

Add to this that masking, when prescribed for the general population, does not appear to reduce viral transmission, and a cost-benefit analysis informs that healthy children should not be masked — ever.

Common sense dictates that if our noses and mouths were meant to be covered, we’d be born with a membrane over them. Masking children is as stupid as masks may, tragically, make children become. Just stop.

As for the public officials enforcing mask mandates in defiance of all reason and science, they should be charged with criminal negligence.

Below is a short video on the COVID kids’ reduced cognition.