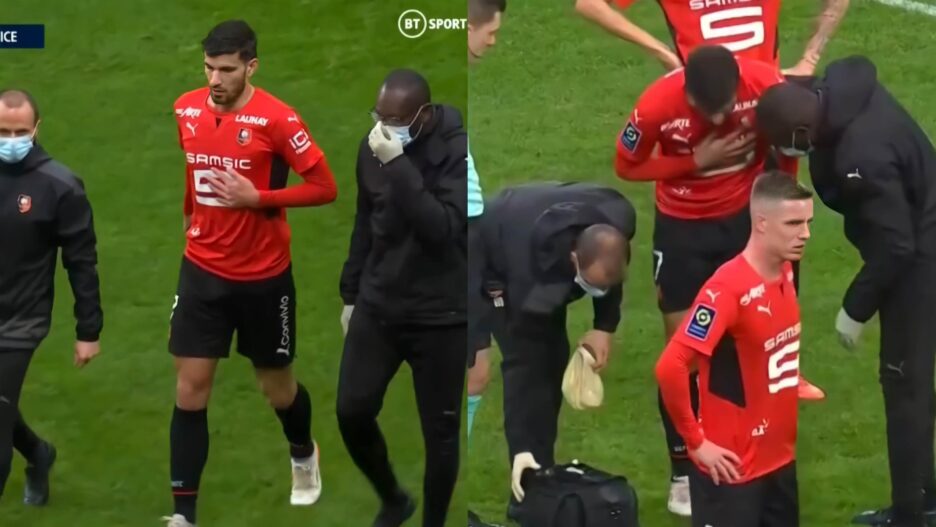 French professional footballer Martin Terrier, who plays as second striker for Ligue 1 club Rennes, left the pitch on Sunday during the match against Nice after experiencing chest pain.

Martin Terrier, 24, was escorted out in the 30th minute of the game after feeling chest pain and having a hard time breathing.

No official statement has been released yet from his team.

The French professional footballer Martin Terrier, who plays for the Ligue 1 club Rennes, was replaced on Sunday during the match against Nice after feeling chest pain.

This is already the third incident in a few days in which a top European footballer clasps his chest in the middle of the game and can no longer continue playing.

The accumulation of these cases has raised the question of whether the cases of players taken off the field due to heart and breathing problems are due to undesirable effects of the COVID vaccine.

After 30 minutes in the match against OGC Nice, Terrier bent and seemed to wrestle for air. Paramedics rushed to the field when the 24-year-old pointed to his chest in obvious need. Shortly afterward, he was taken off the pitch.

The incident occurred after the young striker scored his first league hat trick (3 goals in one match) in his career a week ago against Saint-Éttiene. The three cases within 24 hours are only the youngest that worry the football world.

Terrier became the latest high-profile athlete to leave the game due to chest pain. This was the third incident this past weekend where top European athletes were seen clutching their chests and need to leave the game early.

Napoli midfielder Piotr Zielinski, 27, was taken out of the game after struggling to breathe during a shock Serie A defeat by Empoli. It is just 24 hours after Manchester United defender Victor Lindelof’s incident.