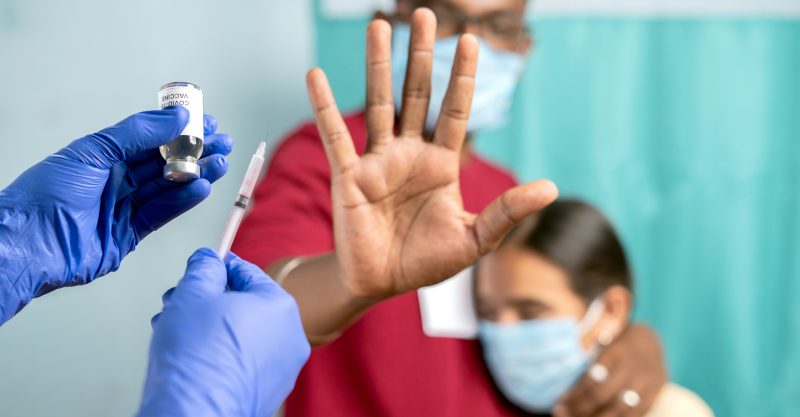 COVID vaccines are “irreversible and potentially permanently damaging,” says Dr. Robert Malone, who explains why 16,000 physicians and medical scientists around the world signed a declaration publicly declaring healthy children should not be vaccinated for COVID-19.

Before you vaccinate your child — which is irreversible and potentially permanently damaging — find out why 16,000 physicians and medical scientists around the world signed a declaration publicly declaring that healthy children should NOT be vaccinated for COVID-19.

On behalf of these M.D.s and Ph.D.s, I have published a clear statement outlining the scientific facts behind this decision:

My name is Robert Malone, and I am speaking to you as a parent, grandparent, physician and scientist. I don’t usually read from a prepared speech, but this is so important that I wanted to make sure that I get every single word and scientific fact correct.

I stand by this statement with a career dedicated to vaccine research and development. I’m vaccinated for COVID and I’m generally pro-vaccination.

I have devoted my entire career to developing safe and effective ways to prevent and treat infectious diseases.

After this, I will be posting the text of this statement so you can share it with your friends and family.

Before you inject your child — a decision that is irreversible — I wanted to let you know the scientific facts about this genetic vaccine, which is based on the mRNA vaccine technology I created:

There are three issues parents need to understand:

The first is that a viral gene will be injected into your children’s cells. This gene forces your child’s body to make toxic spike proteins. These proteins often cause permanent damage in children’s critical organs, including:

The most alarming point about this is that once these damages have occurred, they are irreparable:

The second thing you need to know about is the fact that this novel technology has not been adequately tested.

Ask yourself if you want your own child to be part of the most radical medical experiment in human history.

One final point: the reason they’re giving you to vaccinate your child is a lie.

The risk/benefit analysis isn’t even close.

As a parent and grandparent, my recommendation to you is to resist and fight to protect your children.

“Never in human history have old people required young people to take risks, make sacrifices and die to preserve older people. We have a fiduciary duty to our children.  Old people sacrifice themselves for children in a moral society, in a robust society, in a society that we are proud of. We do not tell children to take risks to preserve old people.  We need to stand up and take a moral choice and an ethical choice for our children.” — Robert F. Kennedy, Jr. testimony before Louisiana State Legislature

I first became conscious of the twisted logic of vaccinating the children to protect the elderly when I saw the CNN “indirect marketing” campaign to vaccinate children with an unlicensed experimental Pfizer product.https://platform.twitter.com/embed/Tweet.html?dnt=false&embedId=twitter-widget-0&features=eyJ0ZndfZXhwZXJpbWVudHNfY29va2llX2V4cGlyYXRpb24iOnsiYnVja2V0IjoxMjA5NjAwLCJ2ZXJzaW9uIjpudWxsfSwidGZ3X2hvcml6b25fdHdlZXRfZW1iZWRfOTU1NSI6eyJidWNrZXQiOiJodGUiLCJ2ZXJzaW9uIjpudWxsfSwidGZ3X3NwYWNlX2NhcmQiOnsiYnVja2V0Ijoib2ZmIiwidmVyc2lvbiI6bnVsbH19&frame=false&hideCard=false&hideThread=false&id=1458102595847925771&lang=en&origin=https%3A%2F%2Fchildrenshealthdefense.org%2Fdefender%2Fphysicians-scientists-kids-should-not-get-covid-vaccine%2F&sessionId=2e967a50380fa12c67060623518af83f673acddd&siteScreenName=ChildrensHD&theme=light&widgetsVersion=9fd78d5%3A1638479056965&width=550px

After the shock of the realization that what was going on was that Pfizer used CNN as a surrogate to advertise directly to children, thereby driving consumer demand and causing the USG/CDC to purchase additional Pfizer unlicensed EUA SARS-CoV-2 vaccines, I took time to review the clip more carefully and think through what was storyboarded and scripted.

I am no longer confident that children were the target market — I think it was the elderly who watch TV and soak up the constant barrage of CNN fearporn regarding SARS-CoV-2.

The CNN/Sesame Street piece is actually promoting the logic that an elderly grandmother should schedule and transport her grandchild to receive an unlicensed experimental medical product, and that it is the grandmother who is advocating that the child should accept this procedure.

And this is being promoted by a licensed physician who works for CNN, Dr. Sanjay Gupta.

Having posted this observation to Twitter, of course I was immediately ridiculed and defamed by various shadowy media outlets, who seem to think that personal ad hominem attacks are a reasonable substitute for examining the logic of my statements.

“The use of trusted and beloved figures in this propaganda assault to induce children into submitting as guinea pigs to injections with an experimental high-risk zero-liability medical product with no proven benefits for kids is unconscionable and revolting. Big Pharma has turned Big Bird into a child predator.” — Robert F. Kennedy, Jr.

Just stop for a moment. Think about what is happening here.

If you make a decision to administer this product to your child, or you allow the state to insert itself into the family and force you to vaccinate your child, there is a chance that your child will be seriously damaged by the vaccine.

It is likely that this is particularly true in the case of the Omicron variant. Despite the fearporn that you may be subjected to by CNN and other legacy media. This is a scientific fact.

“I think it’s time we stop. Children, what’s that sound? Everybody look — what’s going down.” — Buffalo Springfield, “For What Its Worth”

Frankly, I am really tired of the coordinated propaganda, censorship, and social engineering being promoted by Pfizer, “public health officials,” legacy media and governments from around the world.

Perhaps you are also? If so, you are in the 20-30% of the global population who are increasingly aware that they have been misled. Well, actually (calling it what it is), actively lied to and psychologically manipulated.

The prepared statement at the start of this post came about when I went down to Puerto Rico last weekend to meet with colleagues that are supporting the 16,000+ strong International Alliance of Physicians and Medical Scientists, where we prepared the blunt, concise statement of fact to alert parents of what they are signing up for if they agree to go along with the narrative that is being so actively sold to us, and have their children vaccinated.

This was then video recorded as a statement which is being distributed worldwide via many decentralized channels so that the censors cannot remove it.

And then we held a live-streamed question and answer event focused on vaccination of children with the Pfizer SARS-CoV-2 vaccine. The invitation-only event was attended by over 50 local physicians, medical providers, and parents.

The text of the statement at the start of this post is indeed blunt and may seem shocking to some. But I think that the time for carefully parsing the truth has long since passed. Children are being harmed in the mindless rush to achieve universal vaccination.

Few if any have come out with such a brief, plain-speaking statement about the reality of what parents and their children are being asked or forced to do by government bureaucrats.

But so many have been subjected to so much propaganda — such intentional hypnotism — to accept the logic that it is a good idea to vaccinate our children with an experimental product that is associated with unacceptable and irreparable toxicities in order to protect the small fraction of the population at high risk of death and hospitalization.

According to the latest CDC data, more than 60% of the total U.S. population has been vaccinated, and about 45% of the entire population has already been infected by the virus, recovered and developed natural immunity.

The elderly are heavily vaccinated.

The vaccines do not prevent you from becoming infected, replicating high levels of virus and spreading infection to others.

I will say it again — the elderly are highly vaccinated.

The problem is that the vaccines are not doing what they are supposed to do — prevent infection and spread of the virus. This is even more the case with the Omicron variant.

So what to do?

Start jabbing children who — unless they have other major problems — shrug off COVID-19 disease like they do most other RNA respiratory viruses?

Or start allowing physicians to treat COVID-19 patients in the outpatient setting to prevent them from ever getting to the hospital setting where (almost exclusively in the U.S. alone) they are immunosuppressed with high levels of dexamethasone, placed into a coma-like state and hooked up to a ventilator, and treated with Remdesivir (which is clearly toxic and mimics many of the toxicities of the virus)?

And it reflects a profound arrogance on the part of the Pharma-Govie-World Health elite.

They assert that they understand immunology, virology and evolutionary biology so well that they can freely tinker with the lives of our children using an experimental technology and rushed vaccine product which is neither safe nor effective based on standards and bioethical consensus that have been developed and applied over decades.

They believe that they can inject novel unproven technology and improve the highly evolved human immune system that has developed over millennia to resist respiratory RNA virus pressure.

Arrogance is the kindest term I can think of.

“I know no one’s going to show me everything. We all come and go unknown. Each so deep and superficial. Between the forceps and the stone. Well, I looked at the granite markers, those tributes to finality, to eternity. And then I looked at myself here. Chicken scratching for my immortality.” — Joni Mitchell “Hejira”

None of us are immortal.

Despite the objectives of the transhumanism agenda. Death cannot be avoided. We pass through this world, and hopefully, leave it a bit better when we are gone. Our children are the only true legacy, the only real form of immortality.

Please protect them, and do not ask them to make sacrifices with their health on your behalf. You know this is wrong. So do the right thing. And take this seriously.

Think long and hard before taking an action that can never be undone.